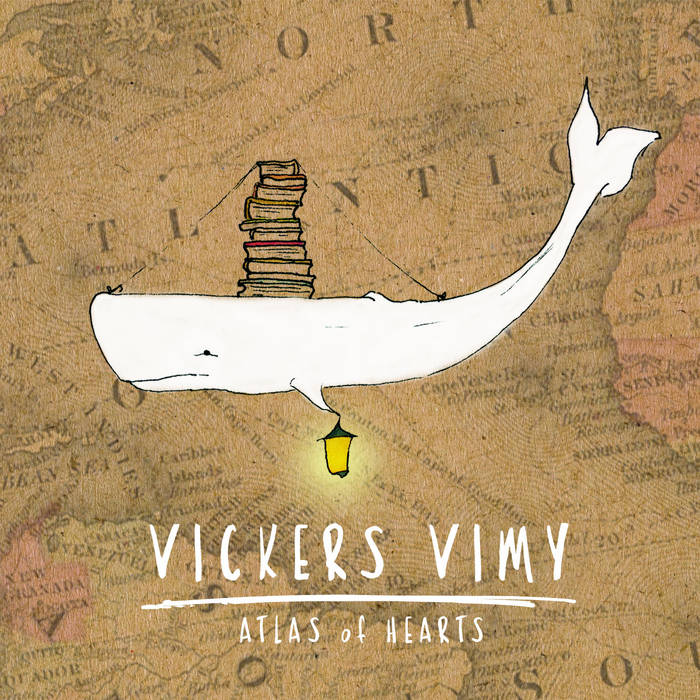 Atlas of the Heart is the band’s second album, and is inspired by a landscape of rich imagery that forces the writer to delve into the past, retrace his own steps, dance with the present and wistfully search for their place in the passage of time.

Vickers Vimy seek to map the coordinates of the heart and the imprints of family in a collection of songs about love, cynicism, fear and loss.

Working on their own tail winds the band wrote, arranged, engineered, recorded and produced the album themselves in a home studio on the edge of the world that houses an aged stove, a wisecracking upright piano and the remnants of two years hard work.

The whole album breathes of life experience. Opening track “Bonfire of Dantes” is influenced lyrically by the book “Dantes Inferno” while musically it takes its cues from Calexico and the score of a Tarantino movie. “Chicago” stirs the soul of R.E.M and lyrically was inspired by the ideas of the Marconi Museum in Clifden.

“Budapest” elegantly unwinds like a postcard from a Wes Anderson film, “When The Helicopter Came” is based on a simple riff that attempts to capture the quiet intensity of Sparklehorse; “Mermaid of Luna Park” chronicles the world of fables and polaroids. Meanwhile “Peg and Hammer” is bold and relentless, a dark folk song that suddenly hits like an unexpected uppercut from a heavyweight.

“Quiet Bow” stills in the rapture of late night lovers, while “Atlas of Hearts” traces the imprint of family.

With “Red Moon Rising” the band visualised an apocalyptic murder ballad, and closing song “Keep your eye on the road” demonstrates the rich craft of storytelling that Vickers Vimy have mastered, exploring friendship and loss with rich woozy instrumentation that is soulful and honest.
Vickers Vimy have collaborated with Colm Mac Con Iomaire (The Frames & Swell Season) and had the pleasure of recording in the studio of Nick Seymour (Crowded House). Vickers Vimy had the amazing fortune to support the late John Martyn. They have have supported the Hothouse Flowers, Maria Doyle Kennedy, and Mundy. They have shared the RTE Music Train with Christy Moore, Kodaline, Lisa O’Neill and Jack L.

“From a stripped down acoustic and very nice vocal it slowly but purposely grows, Buddy Holly on a porch to a slightly morose yet ultimately optimistic Dusty in the space of a minute. The track unfolds into something deliciously heart-warming, it's impossible to stop it turning into whatever mental vision fits your own mind by tracks end.” The Best Of Music And Film February 13th, 2018

“Stand up and take a bow Vickers Vimy...you write some lovely songs and you exude a gorgeous vitality” - Hotpress Greg McAteer

Hailing from Mayo, on the wild atlantic coast of Ireland, Vickers Vimy craft songs that dwell on the borders of folk and Americana. Their second album “Atlas of Hearts” will be released in 2018.